DATE OF PUBLICATION OF THE VALID STANDARD: November 25, 1999.

Section 1.2 of the Coton de Tuléar.

They are not subject to working trials. 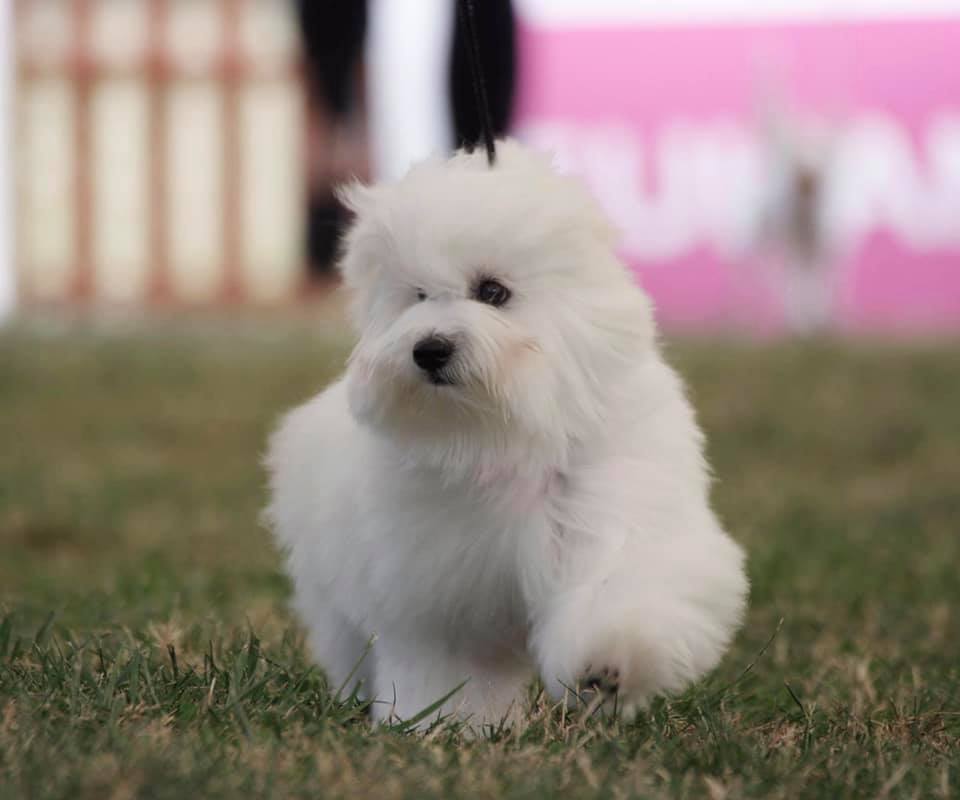 Known in France long before its official appearance in 1970, the newcomer from Madagascar quickly earned a prominent place among companion dog breeds there. He is now known all over the world.

A small, long-haired companion dog, with a white, cotton-like robe, round, dark eyes, and a cheerful, intelligent expression.

• The ratio of the height at the withers to the length of the body is 2: 3.

Joyful, firm, very sociable – both towards people and other dogs. Perfectly adapts to any lifestyle. The temperament of the Coton de Tuléar is one of the breed’s most important characteristics.

Short; seen from above – triangular.

Nose: It forms an extension of the top of the muzzle; black, although brown is also acceptable. Nostrils wide open.

Muzzle: Straight. Lips: Fine, tight, of the same color as the nose.

Jaw and mandible and teeth: Teeth equal. Scissor bite, pincer bite or a tight undershot bite, with good contact between the upper and lower teeth. Failure to P1 does not lower the grade; M3 are not taken into account. 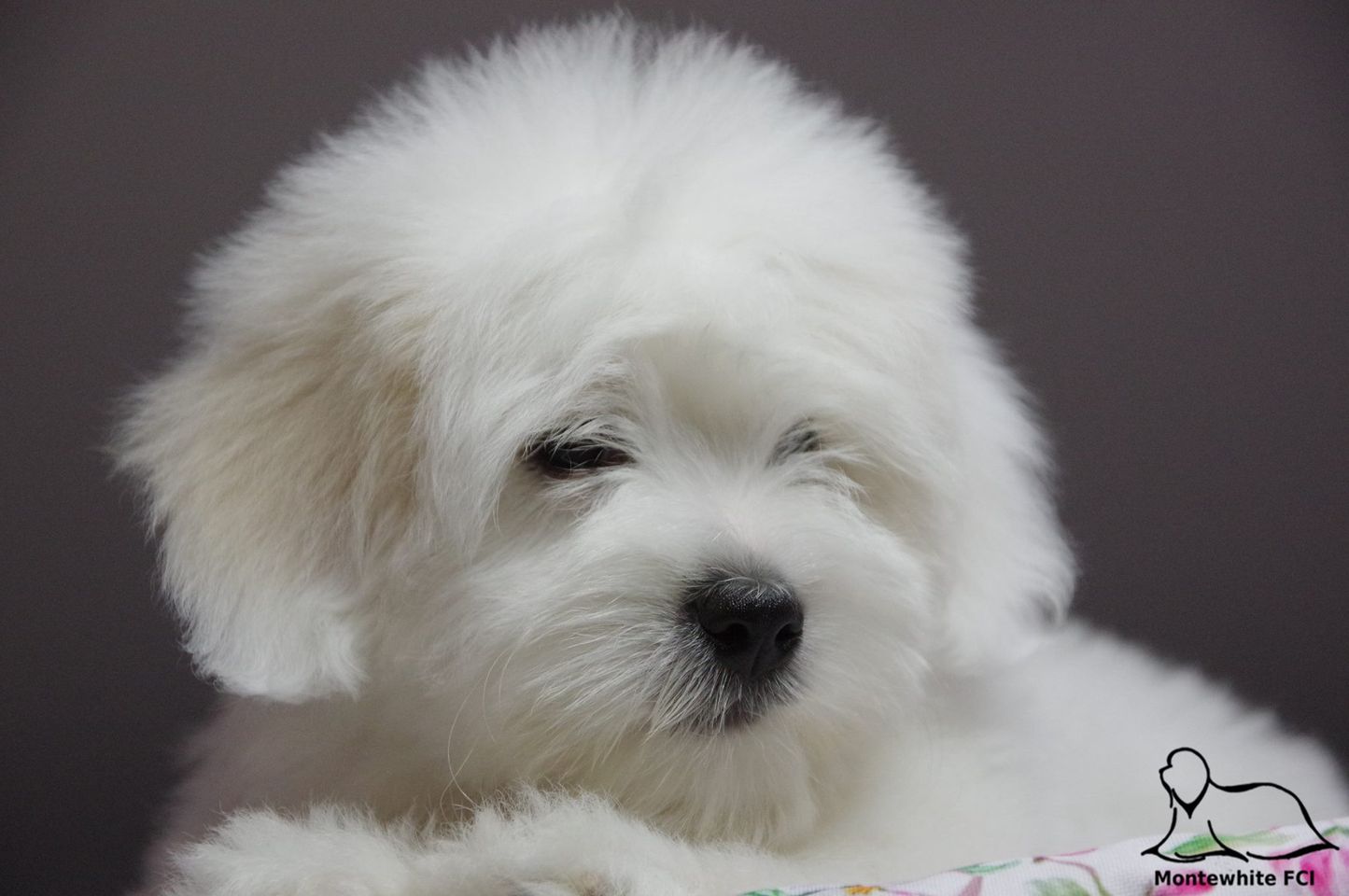 Eyes: Rather round, dark, lively, set wide apart. The rim of the eyelids is well pigmented, black or brown – depending on the color of the nose.

Ears: Hanging, triangular, set high on the skull, fine at the tips. Worn close to the cheeks; reaching to the opening of the mouth. Covered with pure white or light gray hair (a combination of white and black hair, giving the impression of a light gray color) or with patched hair (a mixture of white and fawn hair, giving the effect of yellow patches).

Well muscled, slightly arched. Well set in the shoulders. The neck to torso ratio is 1: 5. Shapely neck without dewlap.

The backline is very slightly convex. The dog should be longer than taller.

Back and loins: Strong back; topline very slightly arched.

Belly: Tucked up but not excessively so.

Set low, in line with the spine.

• Carried below the ankle when at rest; end raised.

• While moving: “joyfully” curled over the back, pointing towards the nape, withers, back or loins. In dogs with lush hair, the tip of the tail may rest on the dorso-lumbar region.

Hind feet upright. Although spurs (extra fingers) are not desired, their presence does not lower the score. Thighs: Well muscled; the angle between the hip and thigh is approximately 80 °. Lower thigh: Placed obliquely; it forms an angle of approx. 120 ° with the femur. Hock joint: Dry, well defined; makes an angle of approx. 160 °. Metatarsus: Vertical. Hind feet: Similar to the front feet.

Free and flowing, not too spacious. While in motion, the top line remains unchanged. No trace of irregular gait.

Delicate, close fitting all over the body; usually pink, it can be pigmented.

This is an important breed trait; its name comes from her. Very fine and soft hair with a cotton structure; it cannot be hard or rough. Dense, plentiful; it may be very slightly wavy.

FAULTS: Any deviation from the above-mentioned characteristics should be considered faults, the assessment of which should be proportional to their degree and extent.

• Skull: flat or too convex and narrow.

• Muzzle: disproportion between the skull and the muzzle.

• Neck: too short, too stocky at the shoulder, too slender.

• Limbs: turned in or out; elbows out; metatarsus wide apart or too close; steep angulation.

• Body height and weight not meeting the requirements of the standard. Disadvantages for details:

• Eyes: protruding, with signs of dwarfism: too light, strabismus.

• Tail: Not reaching to the hock joint; set high, twisted (forming a tight ring); carried flat on the back or hip; carried in a candle-like manner. Taillessness.

• Color: with larger colored markings or any definite black markings.

• Pigment: no pigmentation of the eyelids, nose or lips at all.

• Overshot or undershot or overshot mouth that prevents the incisors from touching; too large spaces between the incisors.

• Aggressive or extreme lack of confidence. Any dog ​​showing physical or mental abnormalities should be disqualified.